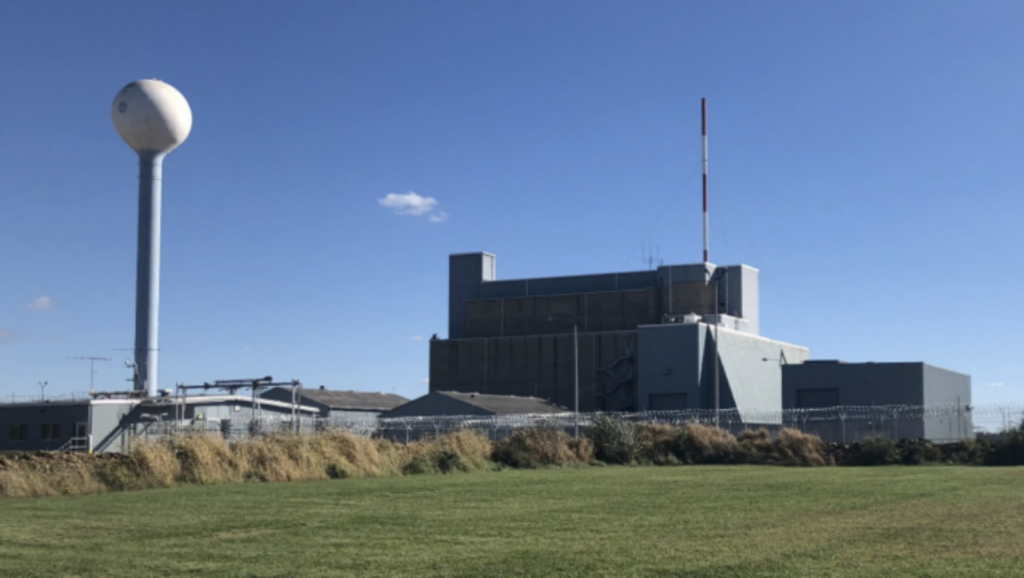 The Morris Operation, located in Morris, Illinois, is the home to what is billed as the nations only high-level radioactive waste storage facility in The U.S, which stores spent Uranium 235 fuel rods from nuclear power production plants.

While all nuclear power plants have storage ponds, the Morris Operation is the only one that has been formally designated to store transuranic waste from multiple power plants and is 95% full.

The site, situated next to the Dresden Generating Station, southwest of Joliet, Illinois and houses 772 tons of spent nuclear fuel, is owned and operated by GE Hitachi Nuclear Energy.

Records from the Idaho National Laboratory, an 890-acre nuclear research facility in eastern Idaho, which currently stores the nuclear waste from the now decommissioned Rocky Flats Nuclear Weapons Manufacturing Plant, outside of Denver, reflect that shipments to Morris Operation began in the 1960s and concluded in 1989.

The spent fuel rods are bundled in a rectangular arrangement of fuel rods held together by end fittings, spacers, and tie rods, and stored in ponds, at the southern end of the facility, under nine feet of water.

The ponds are constructed from thick concrete and have a steel liner to prevent migration of nuclear waste to groundwater sources.

Unlike transuranic waste from the manufacture of nuclear weapons, which has a final resting place at the underground storage facility, Waste Isolation Pilot Plant, outside of Carlsbad, New Mexico, radioactive waste from nuclear power plants does not have a centralized storage facility.

The controversial Yucca Mountain Nuclear Waste Repository, in Nevada, has been proposed to become this final resting place for spent fuel rods, but there has been great opposition to the project and Congress has cut funding to Yucca Mountain, as of this year.

Even if Yucca Mountain were to move forward, the US would immediately need to begin considering second permanent facility, because enough high-level radioactive waste exists that it would fill the embattled permanent storage facility to full capacity.

As a result of a lack of permanent storage, high-level radioactive waste is left stored in ponds, and dry casks, like the one at Morris Operation, at nuclear power plants all over the country.

An interim storage facility, proposed in May 2018, to be built outside Roswell, New Mexico, that would hold 100,000 metric tons of spent fuel rods, has also faced fierce public opposition, leaving the Department of Energy with no options.

Watchdogs have criticized the Morris Operation because of General Electric’s environmental track record, in which GE is either fully or partially responsible for 78 Superfund toxic waste sites, including the $120 million dollar PCB clean up at The Hudson River.

GE Hitachi also most notably designed the six nuclear reactors from the ‘Fukushima I’ power plant, which experienced three full nuclear meltdowns, in 2011, and was found to have been aware of design flaws, at Fukushima, all the way back to 1978, yet failed to make appropriate modifications.

The spent fuel rods stored at nuclear reactors, locally, present additional risks to human safety.  Since there is no one central secure facility, a hostile party could potentially obtain the nuclear materials required to create dirty bombs, from one of these low-security power plant storage ponds.

In a worst-case scenario, plutonium could be separated during reprocessing of the spent fuel, by a well-funded adversary, to create a full-scale nuclear weapon, according to WISE (World Information Service on Energy), an anti-nuclear proliferation group in Amsterdam.

While the Department of Energy works to clean up 107 radioactive sites around the country, the Morris Operation, and other sites, highlight the need for a permanent solution to our nation’s nuclear waste problem.

Yet, as the battles are waged to stop the development of Yucca Mountain, and the proposed interim storage site, in New Mexico, it becomes stunningly clear that we may never find one.